Latvian pianist and violinist, Antonina Suhanova, Sabine Sergejeva and British cellist Toby White are all international soloists and chamber musicians who met and graduated from the Guildhall School of Music and Drama under the tutelage of distinguished professors Ronan O’Hora, David Takeno and Louise Hopkins.

Between them they have performed extensively throughout the UK and Europe in countries including Latvia, Russia, Italy, Germany, Netherlands, Switzerland and many more. They have also made their debuts in distinguished UK halls such as the Southbank Centre Purcell Room, LSO St Luke’s, St Martin-in-the-Fields, St James’s Piccadilly, Milton Court Concert Hall and the Barbican and Wigmore Halls.

Antonina and Toby have been playing chamber music together since 2013 and both Sabine and Antonina perform regularly together as a duo in Latvia and the UK. Most recently recording works by Schumann for Latvian Radio in June 2020. Performances of Antonina have also been broadcasted by Latvian Radio 3 “Klasika”, Russian TV Channel One, Switzerland Radio Espace 2 and recorded her Wigmore debut for BBC Radio 3. Toby made his BBC Radio 3 debut at the 2016 proms performing chamber works by Anthony Payne and has performed live for them with the Jubilee Quartet after releasing their debut album on Rubicon classics label. 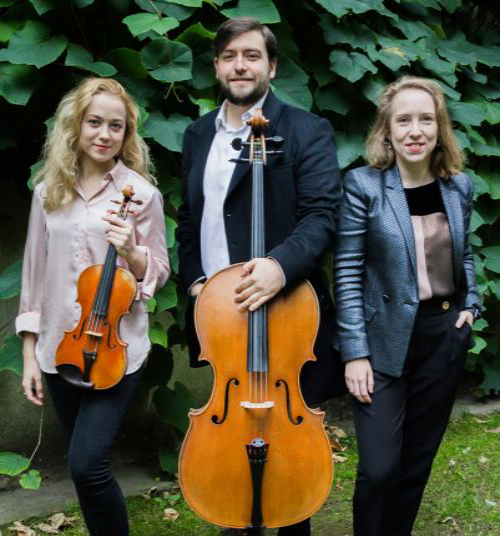 Sabine and Toby play together regularly as founding members of the Jumis Ensemble, a new flexible London based chamber ensemble. Toby is also a member of the award winning Jubilee String Quartet and Sabine is a member of the chamber orchestra Kremerata Baltica. Sabine as a member of the Accendo quartet was a 1st prize winner of the intercollegiate string quartet competition “Cavatina”. As chamber musicians they have collaborated with many world class performers including; Andras Keller, David Waterman, Levon Chilingirian, the Emerson and Takacs quartets, Janine Jansen and Donald Weilerstein.

During their studies in London all artists have held many awards and been recipients of multiple prizes. Antonina is a recipient of the Hattori Foundation Senior Award, the Kenneth Loveland Gift, the Drake Calleja Trust award, Making Music UK, the William Brown prize in the Scottish International Piano Competition (2017). Both Antonina and Toby are award holders for the Worshipful Company of Musicians and are recipients of Help Musicians UK awards. Toby held the Karl Motesiczky Scholarship from 2017-19 whilst completing his Artist Diploma and has held grants from the Pierre Fournier and Leverhulme Trusts. Sabine, currently completing her masters degree at the Guildhall School is supported by the Countess of Munster Musical Trust Derek Butler Award.